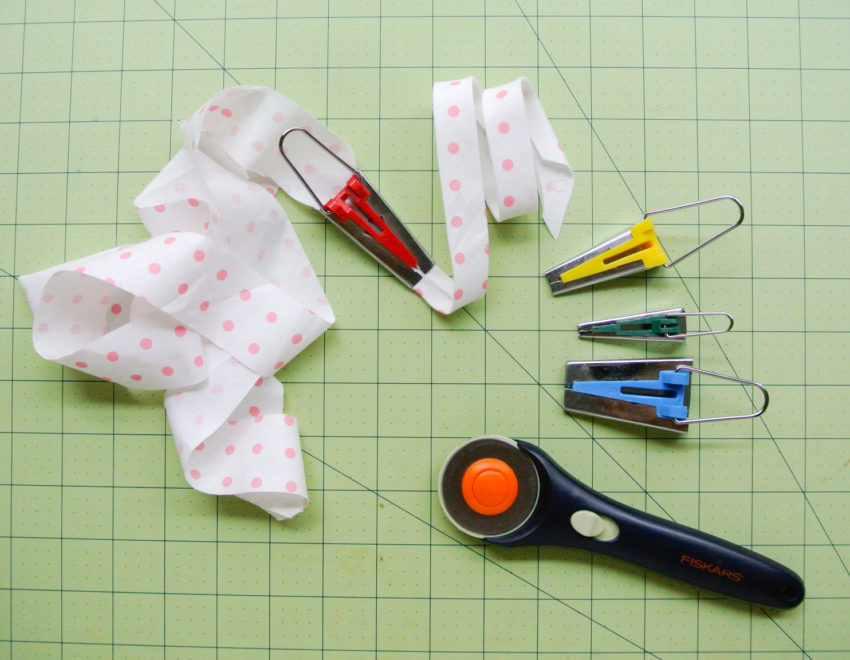 Bias tape is a MUST-HAVE ESSENTIAL in your sewing toolbox. You can purchase them from fabric stores in an array of colors and sizes. However, they are very easy to make and also gives you control over the color and design when you make it yourself. On top of that, it is also more economical to make them (versus buying) and there are SO many uses for them. Once you learn about their versatility, you will definitely want to keep some on hand. Today I will show you how to make two types of bias tapes (single and double fold) with a bias tape maker.

Before we get started, let’s go over some basics!

What is Bias Tape?

Bias tape is a piece of bias strip that has been pressed in a specific way (photo below) so that it resembles a long piece of tape, hence the name “bias tape”.

Single Fold bias tape is bias strip with the two sides folded in to meet each other at the middle. Singe fold bias tape, as the name implies, only has a single fold. Thus it lays flat without excess bulk so it is good for lining armholes and necklines. Other uses include hemming a circle skirt or lining a pocket edge. Additionally, it can also be used a decorative element.

What is a Bias strip?

A bias strip is a strip of fabric of same width that has been cut on the bias of the fabric.

So, what is Bias?

If you carefully examine a piece of woven fabric, you will see that the fabric is made of interwoven threads that are perpendicular to each other. Now think of a loom and how to weave fabric. You have a set of threads that are suspended from top to bottom of the loom, then you have the thread you weave in and out of these suspended threads.

When you weave fabric, the width of the fabric does not change (these are the two sides of the loom), because you have already suspended those threads onto the loom (top to bottom) and that determines how wide your fabric will be. The only part that gets longer is the bottom of the fabric as you continue to weave thread in and out of the loom.

The part of the fabric that makes up the two sides of the loom is called the Selvedge, and does not fray. A lot of times you will find that the selvedge of fabrics is a different color than the rest of the fabric, with the copyright and brand information printed.

Armholes, necklines, and hems are commonly finished with the double fold bias tape. It is also used for binding quilts, mats, hot hands, etc. Another common use is to finish raw edges of seam allowances, know as the Hong Kong Finish. If you examine a piece of high-end unlined garment you will find the raw edges beautifully bound with a double fold bias tape. Low cost unlined garments will usually just have the raw edges serged.

What is a Bias Tape Maker and do I need one?

This is how we will be cutting bias strips.

Place selvedge of fabric along straight edge of cutting mat.

Fold one corner of fabric up to form a triangle. This will be 45 degree diagonal to the selvedge.

LEFT: Cut along the diagonal finger pressed line
RIGHT: Cut strips that are twice as wide as your bias tape maker.

LEFT: Take a bias strip and lay it right side up. Make sure the pointy end faces down.
RIGHT: Take a second bias strip, wrong side up, and lay it perpendicular to the first strip with point end towards the first bias strip.

Finished! Wasn’t that easy? You can wrap the bias tapes around a piece of cardboard/cereal box to store.

Now that you know how to make them, the possibilities are endless! Let me know in the comments below if you have any questions. Happy Sewing 🙂